Don’t let the lack of snow fool you. Beaver Creek is not just for winter fun. The mountains are beautiful all year around. You may find it curious that as a teetotaler I attended the Wine & Spirits festival, but I wanted to see if even I, without a drop of alcohol, would enjoy it. I did, but how?

Check out the full story to hear about walking around the green summer ski slopes, eating gourmet food, watching others sample and discuss the nuance of tannins and other wine talk all in the first day! Then we ride the chair lift, go for a jeep ride, play disc golf and finish it all at the Walk Around tasting which seemed to me to have more gourmet food than wine & spirits! Also, there are two videos, one for each day in Beaver Creek. Check it out! 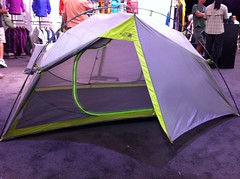 I’m in Salt Lake City for the next few days checking out the latest and greatest of outdoor recreation gear that will be hitting the markets in the very near future.

The show started at Jordanelle Park where participants could try out many of the new paddleboards, kayaks and the various accessories that go along with them from sails to clothing to booties and more.

Next, we head to the Salt Palace convention center in downtown SLC where hundreds of outdoor brands have set up shop to display their goods. I’m tweeting about what I find as I go at @offyonder and below are the videos I’m producing for Elevation Outdoors magazine each day. I’ll also be doing a recap writup for Snowshoe Magazine.

All that snow had to go somewhere, and one of those somewheres is the Roaring Fork River. Talbot and Michael of Blazing Adventures took our merry crew on a great ride. Normally scheduled for 2 hours, we were done in an hour and a half because the river was so full and the water moving so fast. Although the river was swollen and brown with all the surrounding hillsides running off with the snowmelt from a record snow year, our guides had already run the river a number of times, without clients, to be sure the course was safe. At fist, I contemplated accepting the wetsuit they provide, but I’m glad I did. As one of our guides mentioned, “the water in the river today was snow yesterday” and there was plenty of splashing, especially since I ended up in the front of the boat. But I did manage to sit on the same side as our guide, which meant a slightly dryer ride than what Bob got on the opposite side, as you’ll see in the video. Click the title above, or the “full story” link below to see the video. Enjoy.

Click the title or “Full Story” below to read more and to see the video and photos.

If you’re into cycling, Aspen is the place to be. We were under the care of the Little Nell Adventure Center in Aspen and they outfitted our merry band of bicyclists with top of the line Orbea and Colnago carbon frame bikes which were nothing but a pleasure to ride. Pro rider Scott Kasin led us up the 10 mile 4-5% grade climb. Remember that Aspen, where we started already sits at 7,900 feet and we climbed nearly 1,600 feet to 9,500 feet. Just short of the top, I passed a guy and asked him how he was doing and his reply was “Just trying to keep up with Lance!” I chuckled and replied “Aren’t we all!” Thinking he was speaking in cycling generalities. But low and behold, I pulled up to Scott chatting with a group of cyclists in the shade, and one of them was wearing a black jersey with a yellow LIVESTRONG stripe across his chest.

A quick day trip with Bob to get into some fresh powder near Boulder, Colorado.

While at Christmas camp, I set up my camera to take 30 second exposures for as long as the battery would last. Then I put another battery in and kept going. You’ll see the frame shift now and then, that’s probably a new battery going in. It’s not the most exciting video you’ve seen, but then again, this is my experimentation laboratory. Welcome to it. I’ll try to get a better one another time. Stay tuned.

Christmas this year was a blast. I was up at the Adventure Unlimited Ranches in Buena Vista, Colorado with my mom. My primary job was to drive ski vans to Monarch and other ski areas as necessary, but I was also asked to put the “end of camp slideshow” together. Guests submitted their photos and Andy helped me sort through them (though, we asked the submitters to do a bit of editing themselves – this helped heaps). I took little video clips throughout the week and put it all together in iMovie.

In looking for a good soundtrack, I texted my friend Alex Cook and asked if I could feature songs from his recently released “Tree of Life” album and he was all for it. Better yet, he was cool with me posting the whole thing to YouTube. Since YouTube limits videos to 10 minutes, the slideshow is in two parts, both are below. Enjoy!

At Christmas Camp in Buena Vista, CO we offered something new this year: backcountry skiing. We only had one camp guest sign up, but that was just fine as seven staff (including myself) went on this trip. The slopes were gentle and the weather was perfect. See it all in the video below. I originally had Tegan and Sarah’s “Take Me Anywhere” as the sound track, but YouTube has a soundtrack copyright checker and disabled the audio. I think that’s pretty neat that they can check for that sort of stuff now, but it forced me to choose one of their “approved” audio tracks which was just a touch longer than the video so it gets cut off and I can’t fade it down for when I ask Daryl (our one guest) what he thinks of backcountry skiing. Fortunately, I had already added subtitles to the most important part of his response. Enjoy: 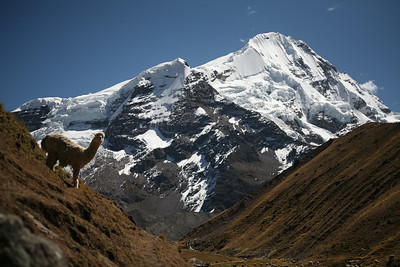 Our main objective in the two days we were back in Cusco was to get ready for the Ausangate trip. This included getting plenty of rest and getting our gear together. I needed to rent plastic mountaineering boots, crampons, an ice axe and a harness. Martin found Alfredo, a guide with Andean Destinations, who had everything I needed including a set of Asolo boots that were well worn. Nay, beaten – these boots had chunks of foam missing, delaminating Velcro, packed out liners and they stunk to high heaven. But they fit perfectly.

Dave and Martin went shopping to get our rations for the trip sorted out and now that the trip has passed, I can say they made some excellent choices. Though, most of the credit goes to our trip cook, Jose. I noticed he did some shopping along the way on the trek. Picking up fresh veggies and fruits from farm stands along the way and whipping it all up into multi-course gourmet meals each time we sat down to eat.

Instead of departing Cusco early in the morning as planned, we left late the night before for two reasons. First, the solstice celebrations were on the cusp of jamming up the city and second, the rumors of a farmers strike that we started hearing about in Patacancha were getting louder. They have been known to roll massive boulders out into the middle of the road in the wee hours of the morning just to jam things up to make their point. We wanted to avoid this so we made a late night escape out of the city to the small town of Tinki.