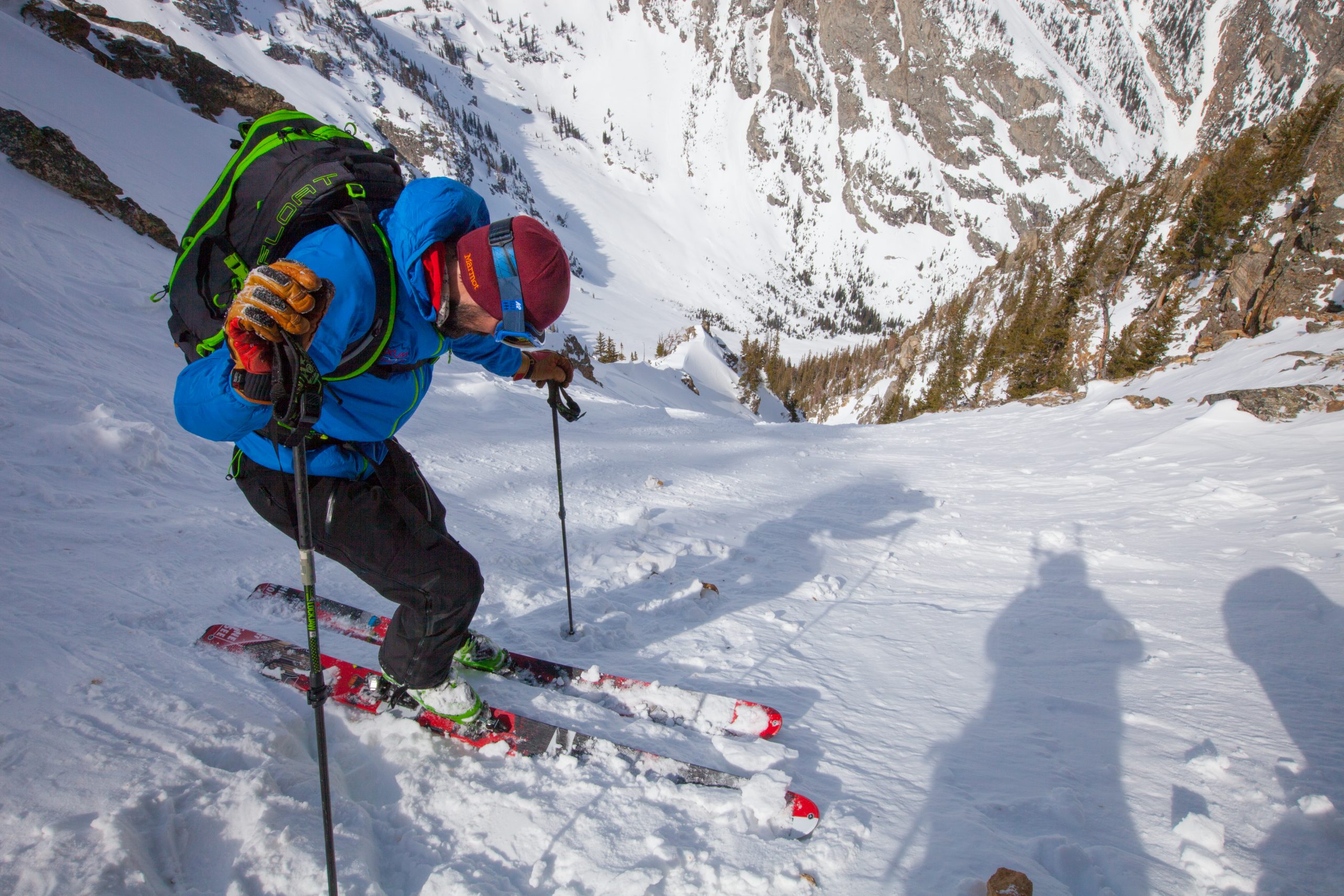 UPDATE: My DSLR photos from this trip are now posted.

I’m far from being an expert skier, despite skiing expert runs at ski areas. I’m at that point in my skiing where it takes a lot of time on the snow to see much in the way of improvement. Fortunately, I got to see, rather, experience, the fruits of my efforts over the past few years since moving to Colorado. While I was still the weakest skier in the group of outdoor and primarily ski journalists on this trip to Jackson Hole I was able to keep up and even enjoy myself.

The trip was organized and sponsored by Marmot with some help with Polartec. Marmot was using Polartec’s new breathable insulation technology called Alpha. The idea is to be able to be working hard in the winter and dump the excess heat your body creates to avoid overheating and sweating which can be a problem once your body starts to cool off. On the other hand, as you do cool you want your layers to be right to keep you warm enough. Usually this involves stripping and adding layers as you change your activity on the mountain. I’ve been using an Eddy Bauer jacket with Polartec Alpha most of this season and it has been great. The Marmot kit did really well though it could have been colder out to optimize the feature of the technology.

That aside, we met up with the world famous Exum Guides and jumped right into it. Our first day we headed to the National Park to climb up a peak called 25 Short. As in, 25 feet short of 10,000 feet. Once on top, we split up into a few smaller groups and my group set up a small arm rappel to drop into the top of Turkey Chutes, a narrow and long strip of snow starting off at about 40 degrees for a good long stretch then slowly mellowing out. This was the steepest slope I had ever considered skiing in the backcountry. Sure, there are some steeps like this inbounds at resorts, but those have all been checked out by ski patrol. This was totally raw.

Aside from being the weakest skier, I was also the only one on telemark skis. I was 4th to drop into the chute. After a few alpine style jump turns I finally found my confidence to try to drop a knee and get a few tele turns in. It was super scary but also incredibly exhilarating. I traversed a bit more than most others to keep my speed in check since my turns were much wider than those with their heals locked down. The chute had clearly been skied by a few folks since the last snow before we got there, but the northern aspect keep the slope shaded and cool and the snow soft. Sure enough, just as the slope started to mellow out some I held my turn a little too long and ended up loosing my balance towards the upslope side and plopping down. Since others above me were waiting to drop in I knew I couldn’t just sit there for long. The nice part about wanting to photograph all of this as well means I could just traverse off to the side to pull my camera from my chest pack to shoot the next skier and take a little break.

The next day we did another 3,000′ climb up Albright Peak to hit a great run called Wimpy’s. Again, favoring north facing slopes we found some excellent untracked powder. We didn’t get into any tight chutes like the day before and it wasn’t nearly as steep, probably maxing out at 30 degrees. Mostly just super fun open slopes, sparse trees and a good group of guys to share it with. The other groups were going after more aggressive slopes and only found themselves fighting a bunch of crud. We chose wisely.

The final day we hit the resort, sort of. We jumped on the tram at Jackson Hole ski area and traversed from the top to Cody Peak. This was about a 40 minute boot pack including some dicy rock steps all with a sold wind trying to blow us right off the mountain. Check out this video I grabbed:

Once we got our skis on and dropped off the leeward side, the wind wasn’t a problem and was actually quite welcome after climbing back up out of the bowl we ended up skiing twice. First No Shadows on skier’s left and Powder 8 Slope on the right. To finish it all off, we skied off the back side of the face pictured here to return to the ski area and grab lunch. That afternoon we stayed inbounds though we got dragged through a bunch of bumps which by then my legs were so shot it was very much survival skiing.

Nevertheless, it was such a blast to be able to ski some big lines each day and get into some new terrain after having done a bunch of backcountry skiing here in Colorado. I would love to get back out to Jackson again next season. Here are the pics from my Instagram feed: