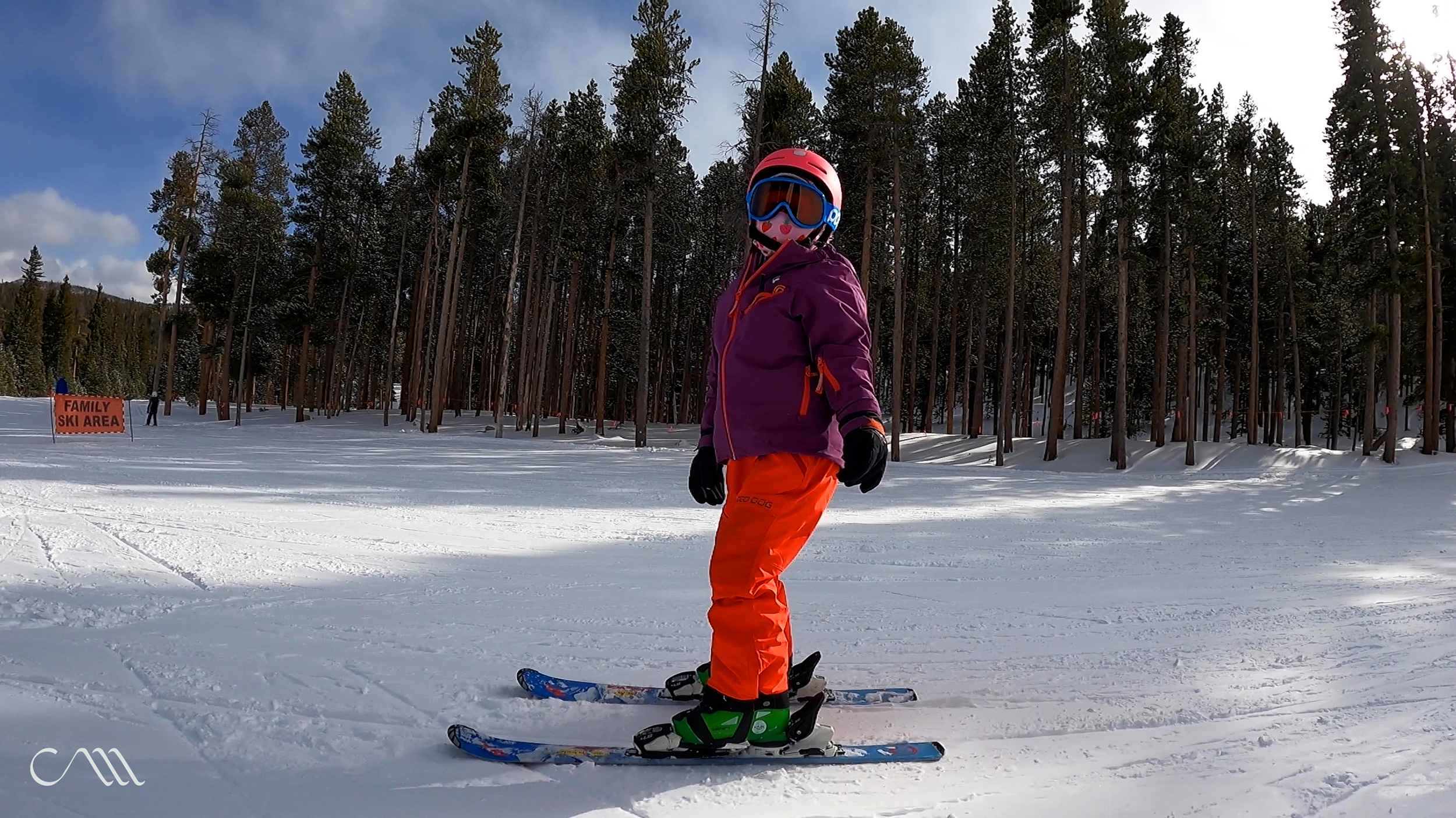 Anyone reading this already knows it takes a lot of gear to get a family, or even part of a family out skiing. And while each family needs to tailor their gear needs according to their circumstances, here are a few things Rosie and I have been using this year on most of our ski days here in Colorado.

Detailed descriptions below and we have a little overview video of each of these items at the end of this post.

The key feature of this ski boot bag is how it converts from a wide, side-by-side configuration with backpack straps to a long and narrow tote. This makes it easier to carry as preferred and to fit in different spots be it in the trunk of a car, overhead bin on a plane, or in the closet.

Because they are heavy, ski boots often end up at the bottom of the ski boot bag—but they are usually one of the first things to get pulled from the bag to put on. That means digging through, or removing the support of all of the other stuff yet to be adorned. It’s a smart design and it works well. I would like to see a larger opening in the top—my helmet needs to be squeezed through. I’d also ditch the elastic cord on the front for another small pocket to help keep little things organized.

Kid’s ski clothing is just as expensive, if not more so, to make than adult ski clothing. But a major part of the price comes from the retail markup. Clothing brands have to work this into the cost of the garment to get the exposure to possible buyers but with electronic publishing, that’s changing and the two dads that started Shred Dog Gear are banking on being able to reach clients directly. They still use high-end materials and demand quality construction but have cut the retail cost.

Rosie loves their gear from the base layers to the outer shell. She often wears the mid-layer puffy or fleece to school during the week which off-sets the cost even more through multi-use scenarios like this. Rey is still a little small to get into their gear—it’s designed for 4-year-olds and up.

Ok, this helmet is a bit of a stretch for “family skiing” — but the truth is whatever helmet we need for skiing bigger lines on our own will work just fine while cruising the green and blue groomers with our groms. That said, the Trooper helmet was first introduced in 2004 and this fall Sweet Protection launches this helmet, the Trooper 2Vi MIPS.

The big upgrade here is the inclusion of Sweet’s 2Vi technology which improves the integration of the helmet shell with a shock absorbing liner and the MIPS layer. I’ve always loved how easy Sweet makes it to slide in some audio chips via the zippered ear flap compartments and they leave plenty of room in the cavity for ears to stay comfortable.

Communications is important—especially when the plan doesn’t include getting seperated. Now, there are certainly cheaper options out there for walkie-talkies, but like the helmet above, a little extra investment in a radio like this means it can be used by the kids and on bigger objectives. This radio is compact and built to last. Most importantly, the Rockie Talkie is easy to attach almost anywhere with the integrated loop and included carabiner. If there’s nowhere to clip the radio, it also includes a detachable leash as a backup to accidental drops. My only beef with the carabiner is the hooked notch where the wire gate rests when closed. This hook is prone to snag when trying to remove the radio from a strap and it plagues anyone who uses them. I’ll probably upgrade the included Mammut Wall Light carabiner with a clean gate style.

The button and switch configuration of the radio favors picking a channel and sticking with it. It’s not difficult to change channels, especially if dialing in a CT privacy code. Also, while the recessed transmit button is great for minimizing accidentally keying the mic, it does make it tricky for little hands wearing gloves to find the button. The recessed button seems a little counter to the concept of being able to clip the radio somewhere. It would make more sense if the radio was more likely to be stuffed into a pocket. Nevertheless, the radio has two small buttons under the transmit button for volume and with a long hold the buttons control CT codes or transmission power. Between the power button and the stout antenna, a toggle switch is used to change channels or with a long hold the radio can go into scan mode or lock the toggle button. That just keeps the radio from accidentally changing channels. The power, volume and transmit buttons are not locked. Also, I’m really glad Rocky Talkie uses the new USB-C plug for charging.

Basically, this pack gives you more pockets without having to manage a backpack. Some ski clothing can be pretty minimal on pockets and we don’t really need that much stuff while skiing the resort, but it can get a little obnoxious to try and stuff all of those things into our pockets (if we have them). The Slope is a chest pack so it won’t interfere with riding a chairlift and it keeps everything very accessible.

In short, it works great. There are a few minor configuration changes I would make—and those are shown in the video below—but I’d like to see the car key leash tucked away elsewhere and I’d like to see some sort of gear loop system, both horizontal and vertical, on the front. Granted, that might interfere with the front zipper some, but that would at least give the user the option.

I say “-ish” in the price above because it seems the price keeps changing and GoPro has a few bundles and other circumstances where the price of the camera itself changes somewhat. As of this writing, the Hero 8 Black is also still listed at $350, FWIW.

Nevertheless, the video below was all shot on the GoPro Hero 9 Black mounted on The Shorty grip/mini-tripod/extension pole. It worked great. The camera and grip tucked nicely into the front roo-pouch of the Slope Chest Pack. We didn’t get too crazy with the footage in the video below, but the quality looks good. See for yourself. We’ll delve into more details on the Hero 9 as well as the MAX, GoPro’s latest 360-degree camera, and the accessories we’re using.