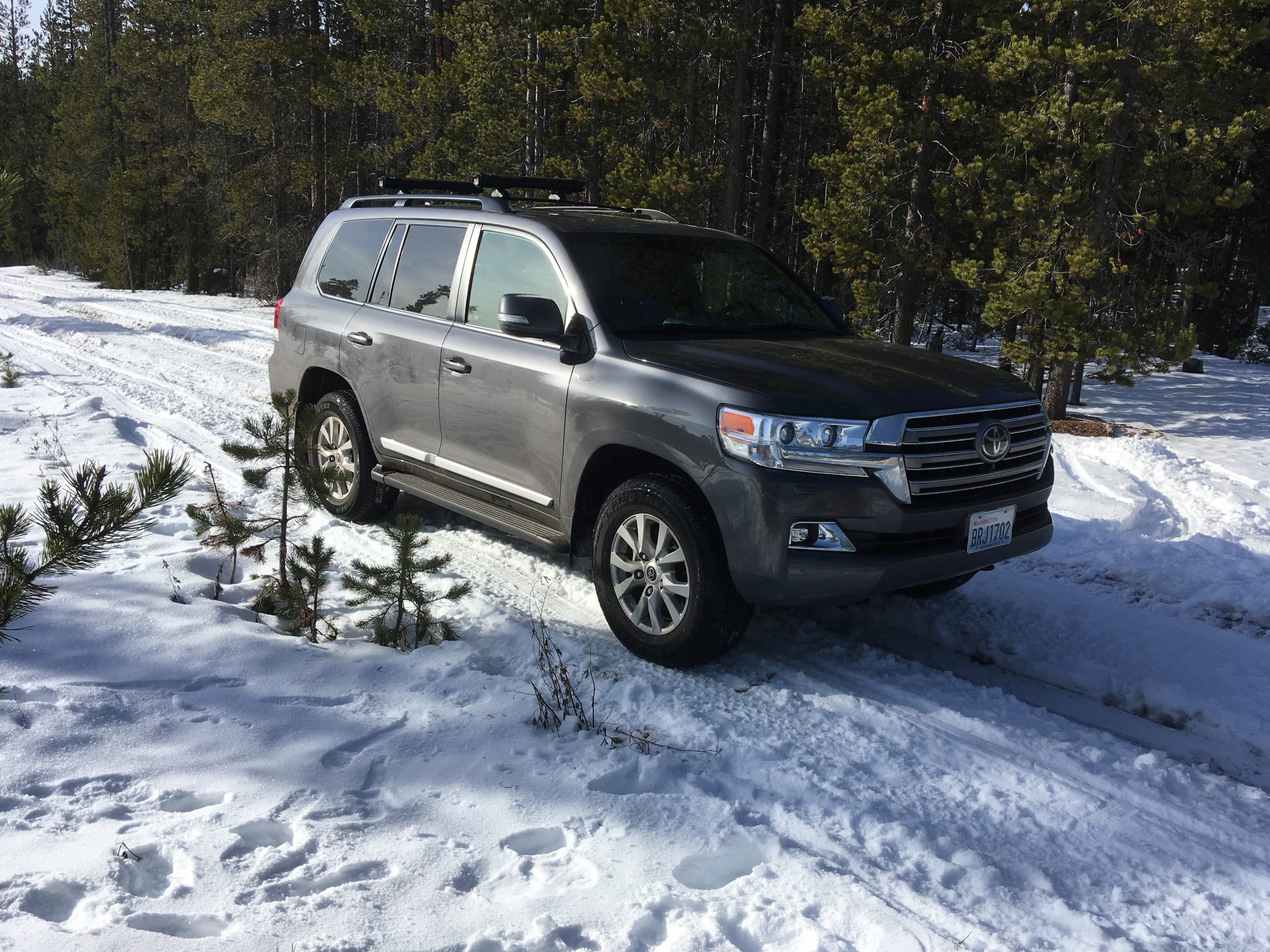 First released in 1951, the inspiration for creating the Toyota Land Cruiser reaches back to 1941 when the Imperial Japanese Army occupied the Philippines and found an abandoned US Military Willys Bantam Jeep. They sent it back to Japan and commissioned Toyota to make something similar. It was called the Toyota “Jeep” BJ and was changed to Land Cruiser in 1954 after the Willys corporation claimed a trademark violation.

Through a number of generations the current Land Cruiser (J200) came through numerous variations as well as spin off configurations across various world wide markets. One of those variations is the LX series from Lexus, Toyota’s luxury division which started in 1983 (though the LX didn’t come about until 1996). Normally the Land Cruiser only comes in one trim. But for 2020, Toyota is offering the standard all-inclusive base trim and a Heritage Edition to celebrate the name plate’s longevity. 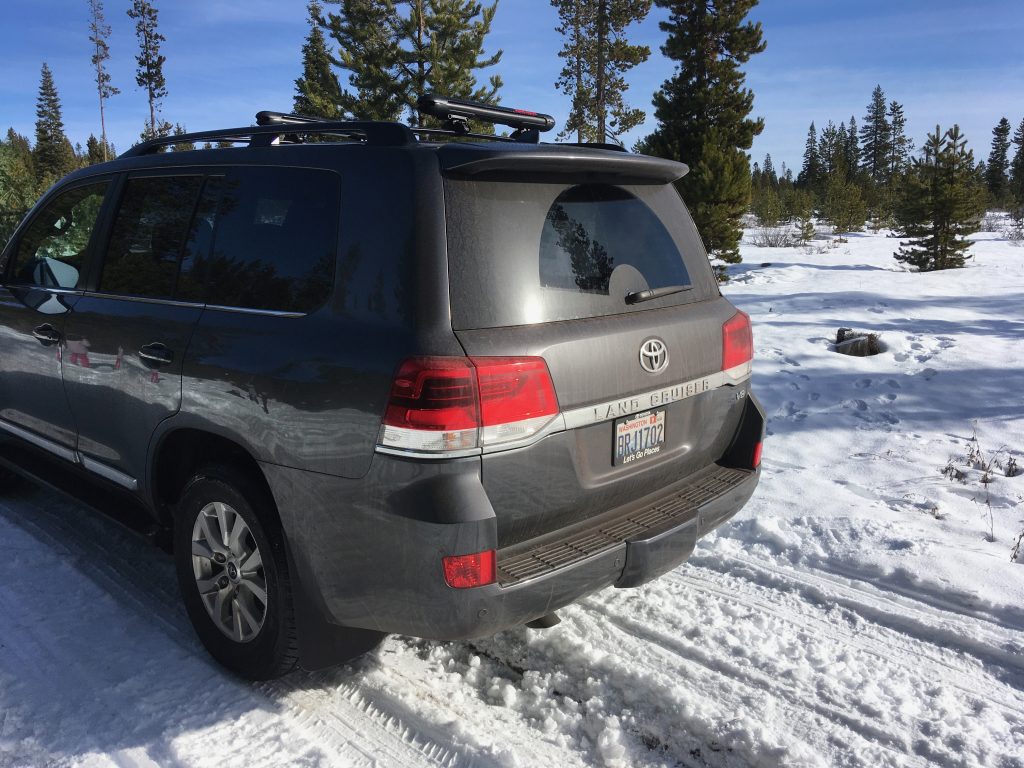 We picked up our test vehicle, the standard base trim, after flying to Seattle. We loaded it up and drove down to Bend, Oregon to go skiing at Mt. Batchelor—about a 700 mile round trip. We had four pairs of skis and all the clothing and gear for skiing and enough clothes for our fortnight long journey. Our test vehicle included the optional rear-seat entertainment package. The 2020 Land Cruiser starts at $85,415 and ours (with delivery fee) as driven came to $89,129.

As is probably true for many Land Cruiser drivers, despite its incredible off-road capabilities, most of our miles were driven on paved roads. On occasion, our paved road was covered in compact snow, but only for the short stint as we approached and departed from the Mt. Bachelor ski area and for a stretch driving along the flank of Mt. Hood, just scraping 4,000 feet near Government Camp. Nevertheless, the Land Cruiser’s full-time 4WD system with Active Traction Control (A-TRAC) and Torsen 89 limited-slip center differential with locking feature made for an extremely comfortable drive on all of those paved miles. 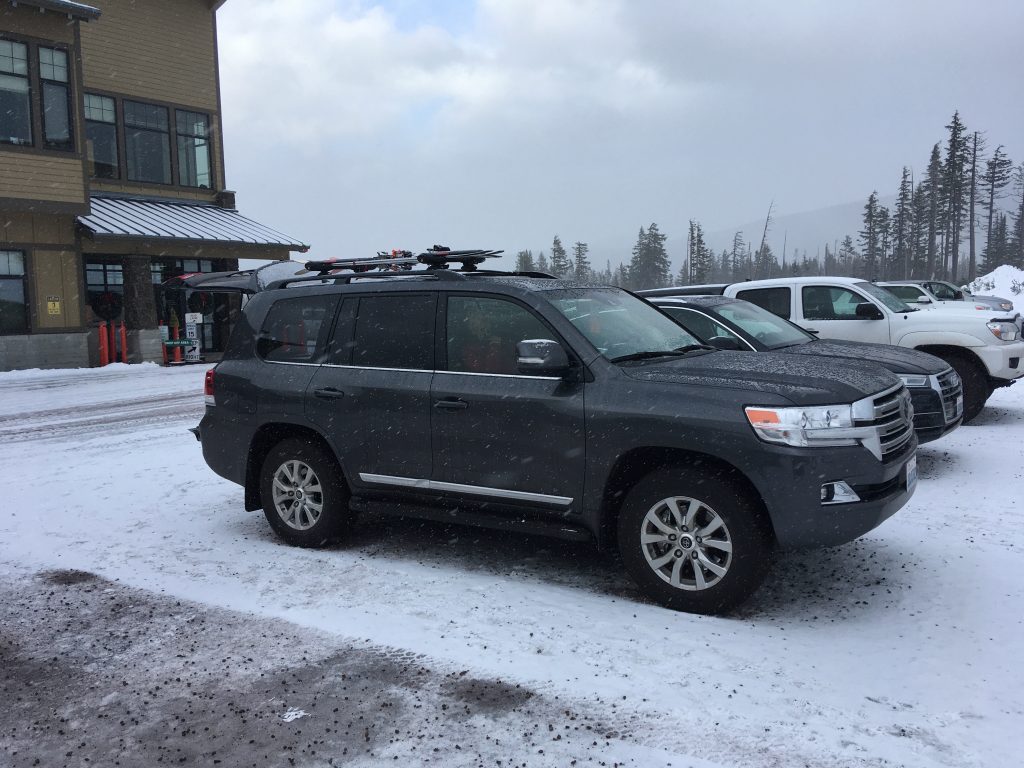 We only experienced a little bit of body roll when taking a sharp turn, usually a 90-degree turn at an intersection a little on the speedy side—only because I was pushing it for this test. But with the family in the vehicle, we never needed to push corners that hard. Otherwise the steering was gentle and easy.

Our main gripe with the handling was how touchy the gas and brake pedals were. It got a little smoother as I got used to it over the 700 miles of driving and maybe having more miles on the parts would help over time, but we’ve driven plenty of low-milage vehicles that were not nearly as touchy as this was. 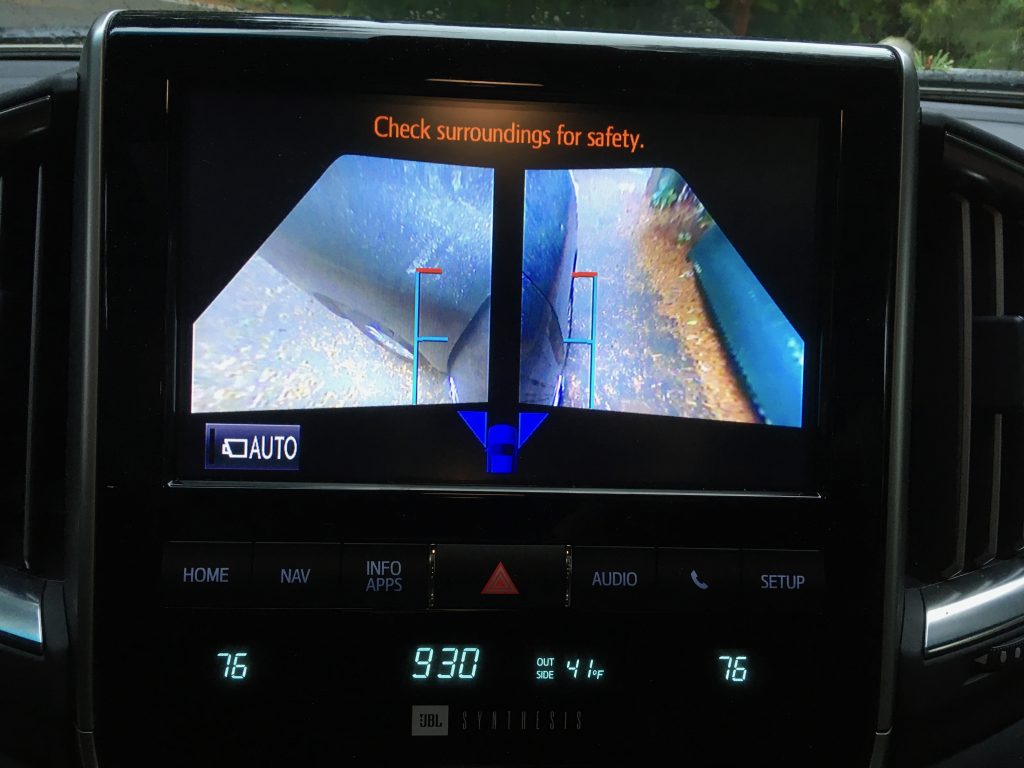 Our one little off-road adventure was up an unplowed Forest Service dirt road covered in about two feet of old snow. In stretches, the snow was rutted 6-8 inches deep from previous drivers and was chewed up some from snow machines and ATV’s. At a modest incline, the Land Cruiser’s full-time 4WD system took this road without a flinch. When we turned around with a three-point turn, the Land Cruiser didn’t hesitate to get out of the ruts and roll up the sloped snowy embankment along the road. It felt like it was ready to just keep going. But that’s hardly a definitive description of the off-road capability of the Land Cruiser. Still, it instilled a healthy dose of confidence knowing we were still a long ways from maxing out its ability, even with the stock mud and snow rated steel-belted radial tires.

Our first impression of what the Land Cruiser could haul was when we landed at the Seattle airport with our massive array of luggage, including skis. We opened the back, folded down the third row and started piling our massive bags and it took it all. We were even able to leave the skis in the ski bag (fortunately, all four skis still fit in our Thule Roundtrip Ski Roller bag) and fit it through the center split dropdown of the second row—this would not have been possible with a 60/40 split second row. 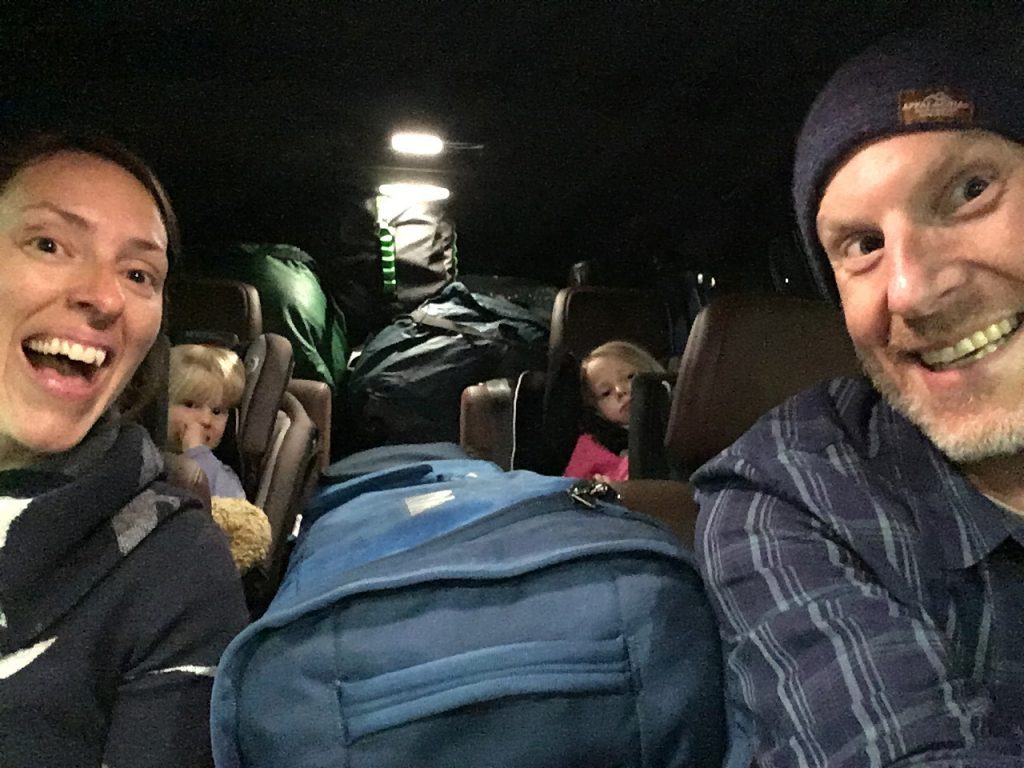 By the numbers, the Land Cruiser has a scant 16 cubic feet of space behind the third row—enough for grocery bags or a 30-inch roller bag on its side. Fold the third row out of the way and it opens up to the spacious 41 cubic feet which we nearly use all of for our long drive. Without needing to take the kids with us, the cargo space doubles to nearly 83 cubic feet when the second row is folded out of the way. 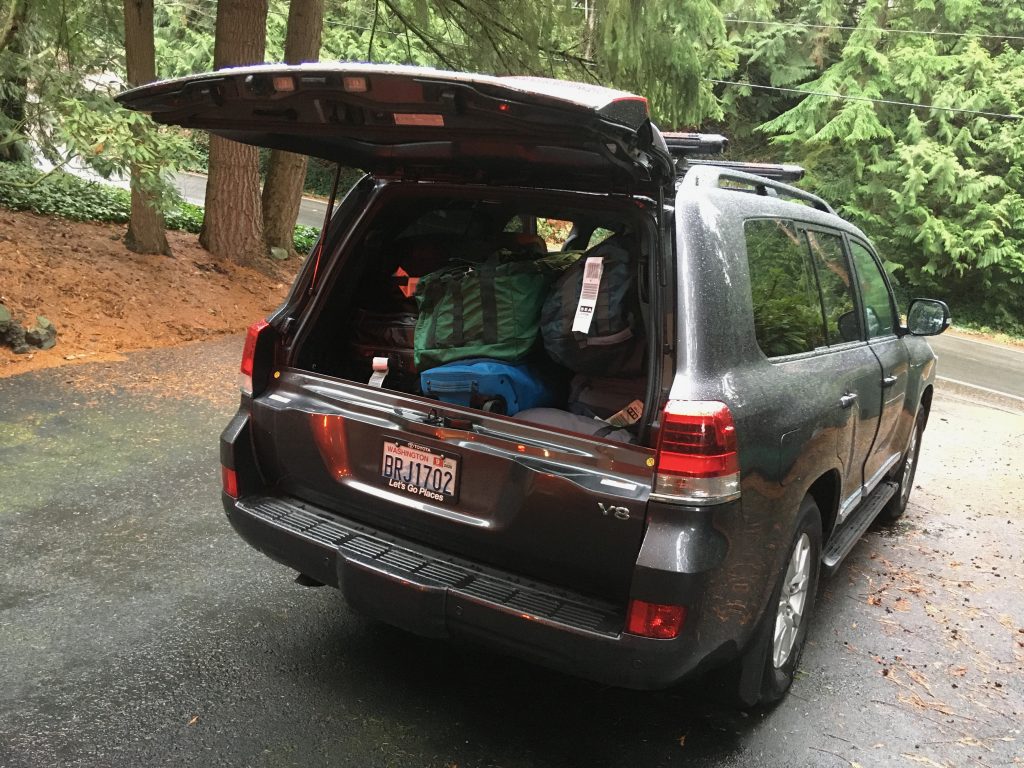 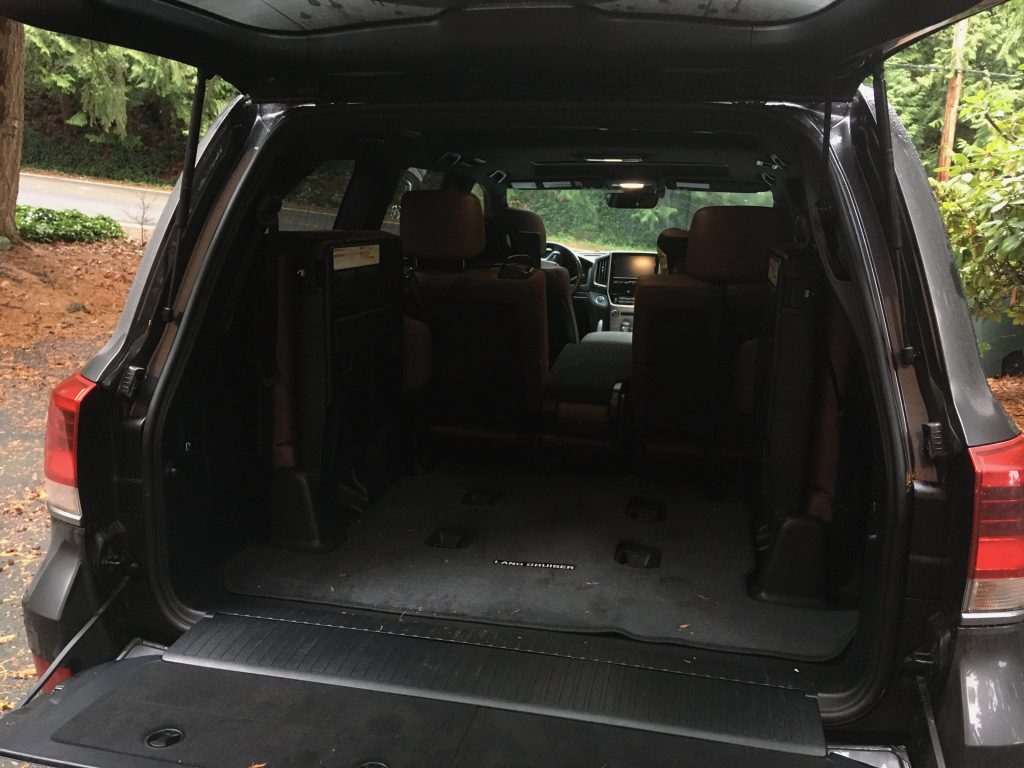 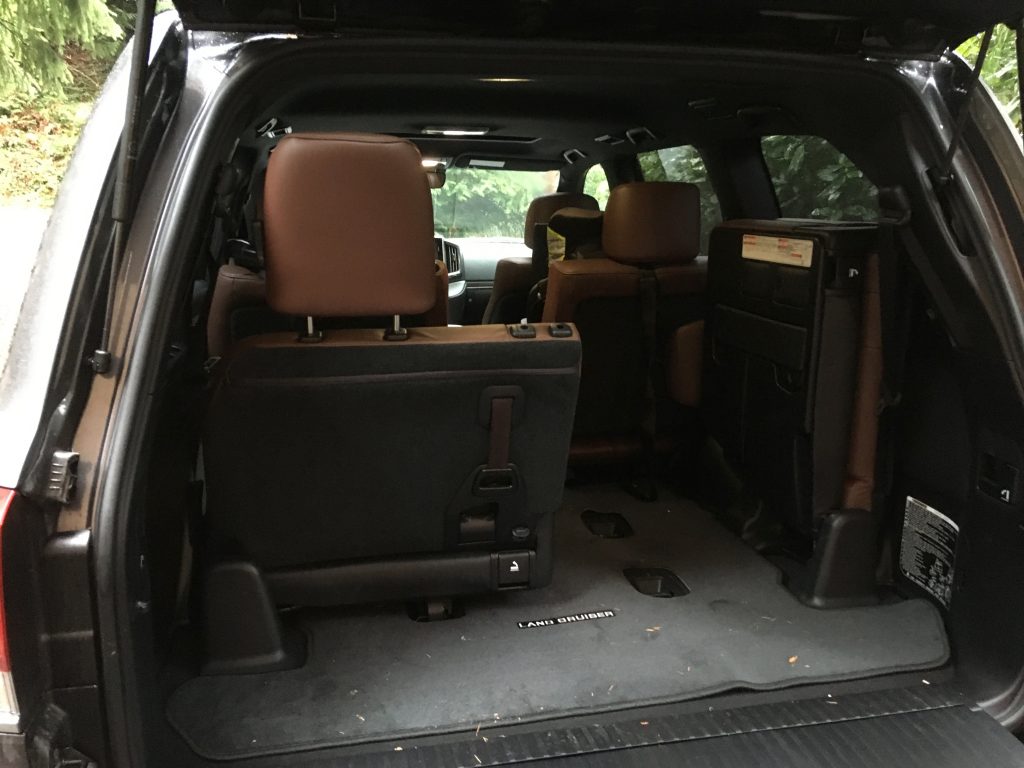 Our test vehicle came with a set of Yakima ski racks on the top, and that was our backup if we needed to make more room on the inside. As it turned out, it was great to be able to keep the skis protected in the vehicle for the long (and wet—it was raining most of the drive along the I-5 corridor) hauls. Once we settled into the Seventh Mountain Lodge just down the road from Mt. Bachelor, we moved the skis onto the ski racks for easier access during our two days at the mountain. Basket cargo racks are also a very popular choice when external hauling storage is needed.

The Toyota Land Cruiser comes standard with an integrated towing hitch receiver and wiring with 4-/7-pin connectors and is rated to tow up to 8,100 pounds.

The 2020 Land Cruiser is full of great amenities—not unlike previous years. Our favorite was probably the split tailgate. It came in handy in a number of ways from giving us a little extra staging space while putting on ski boots yet still providing some overhead coverage to keep the snow (or rain when going hiking) off of our necks. It helped in the up position while the top portion was open to stabilize the load when filling the back. It contains two covered flat storage areas where the jack lever and some extra tools were stashed out of the way while remaining very accessible. 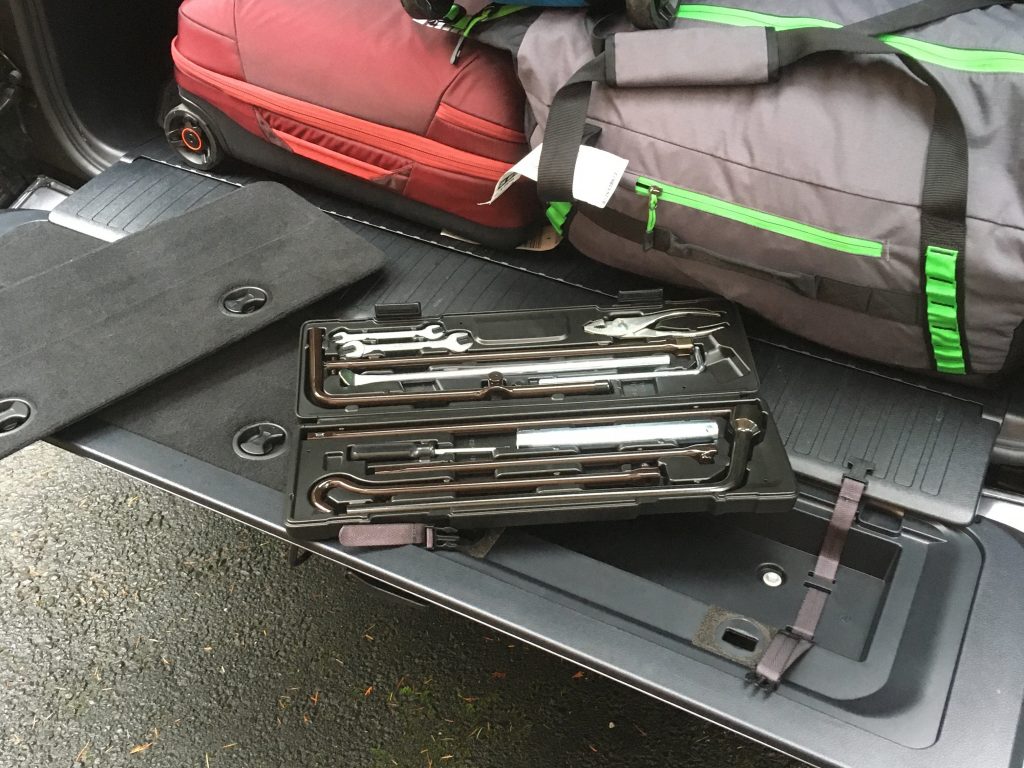 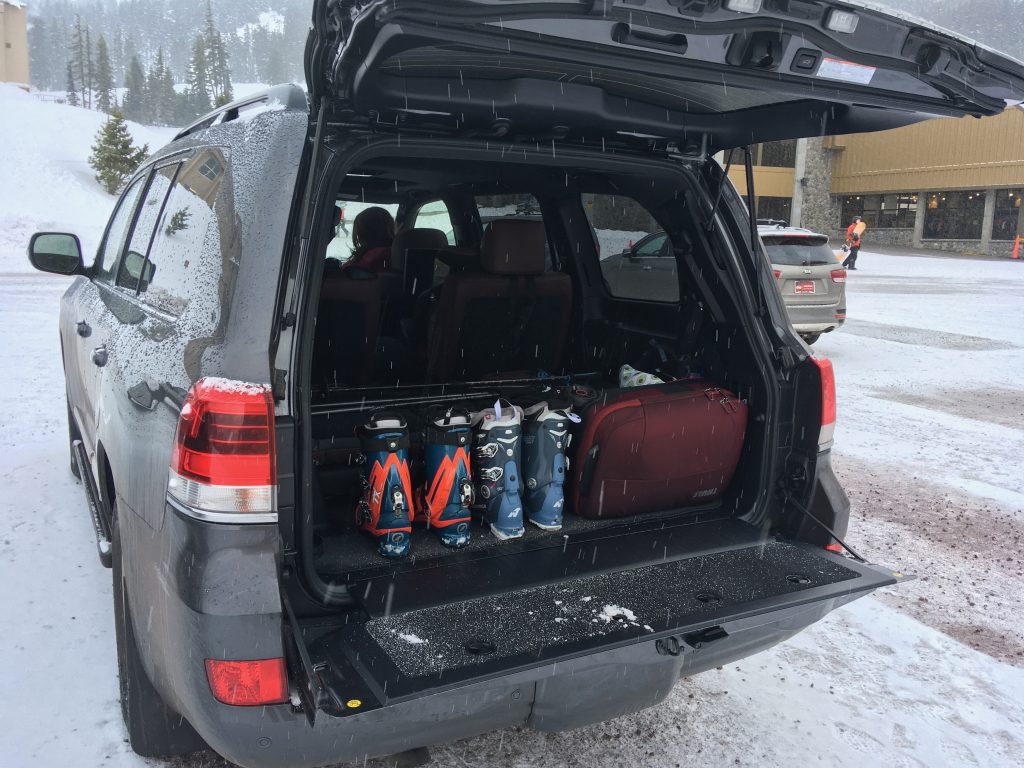 A close second favorite was the cooler box built in between the front two seats. At about the size of a tall 6-pack, it easily held the refrigerated snacks (yoghurt pouches) and drinks we needed for our stints on the road to keep the kids in good spirits. We often travel with a 12v Dometic electric cooler, but it’s always in the rear cargo area and not nearly as convenient to get to as something built in like this. Sadly, the Heritage Edition does not get the cooler box. 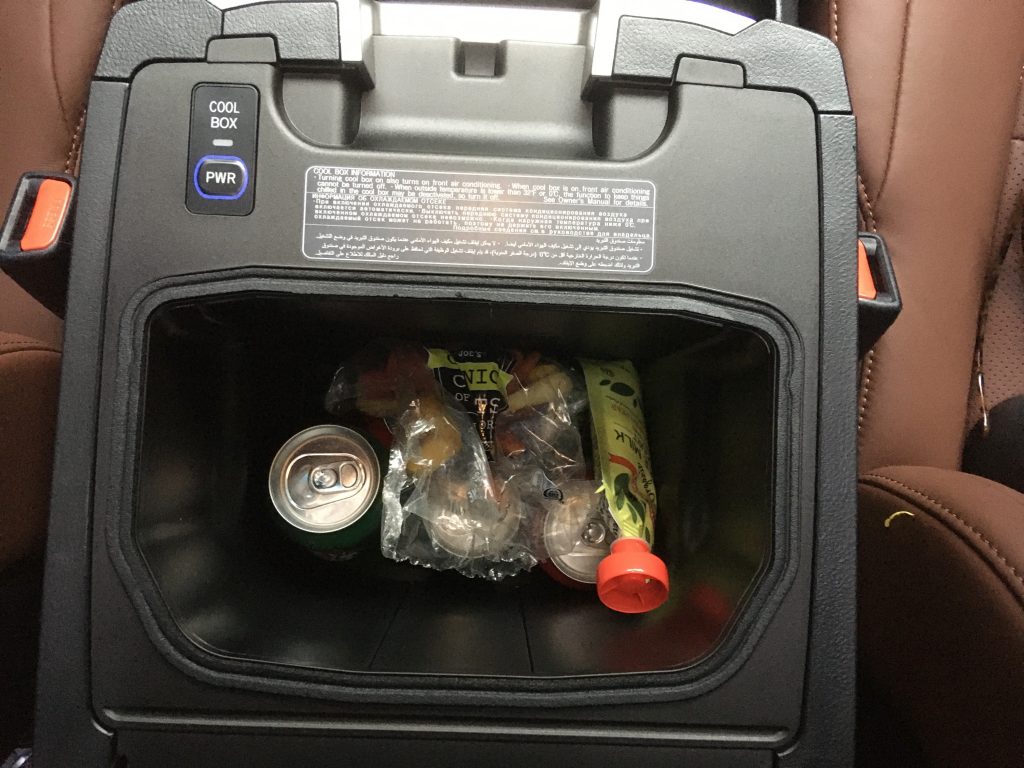 Our least favorite feature was the built in second row entertainment system, the screens of which stuck out from the back of the front row headrests eating up space in the second row. It’s probably meant for teens, but for our littles who couldn’t manage the complicated remote control it meant we had to have it all set up and running while stopped in the driveway or parking lot before we got going. It also lacked the ability to just control (beyond just start or stop) or monitor it from the front infotainment console, so if anything went awry, someone from the front had to get out and look at the screens in the back to troubleshoot. It was disappointing the wireless headphones were moderate quality at best and only ran on AA batteries instead of being rechargeable. Also, they couldn’t be plugged in if the batteries died while on the road. And at over $2k for this extra feature, it would be cheaper to buy two iPads and wireless bluetooth headsets and be able to use that setup beyond just in the back of the Land Cruiser. Also, it was a good thing the screens came with covers, because the kids had a hard time not putting their feet up. 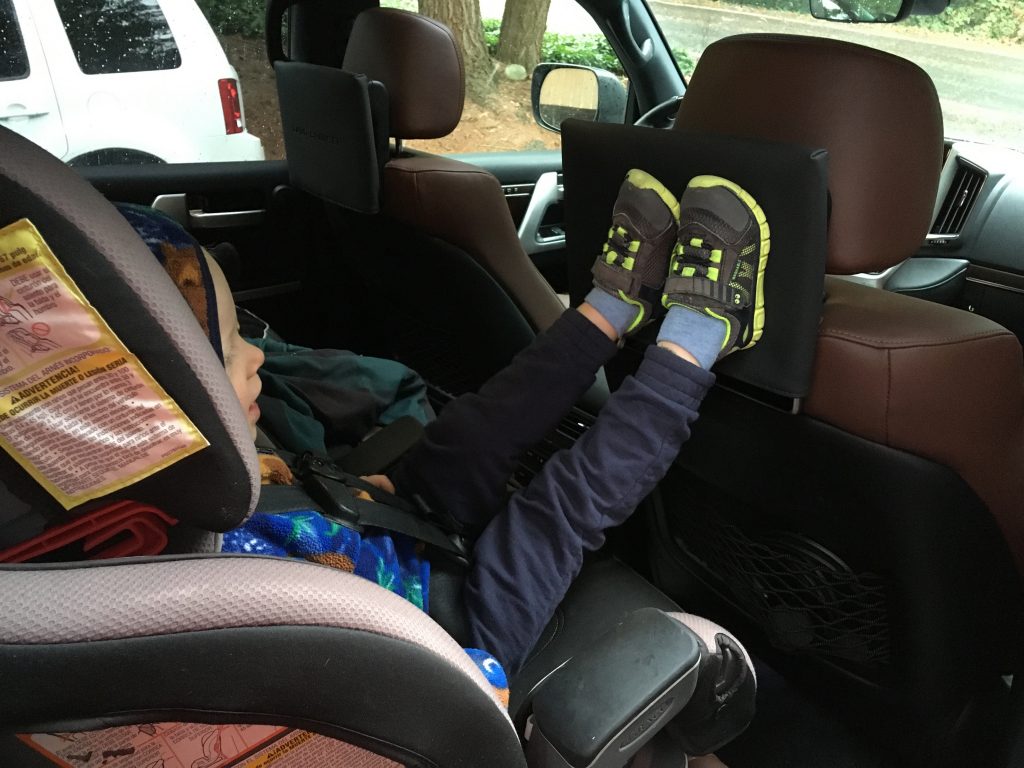 The 2020 Land Cruiser is extremely comfortable with balanced suspension, being well insulated to eliminate road noise, a smooth 8-speed automatic transmission, four-zone climate control, heated and vented front and second row seats, and a 10-way power adjustable driver’s seat, just to name the ones we used the most. 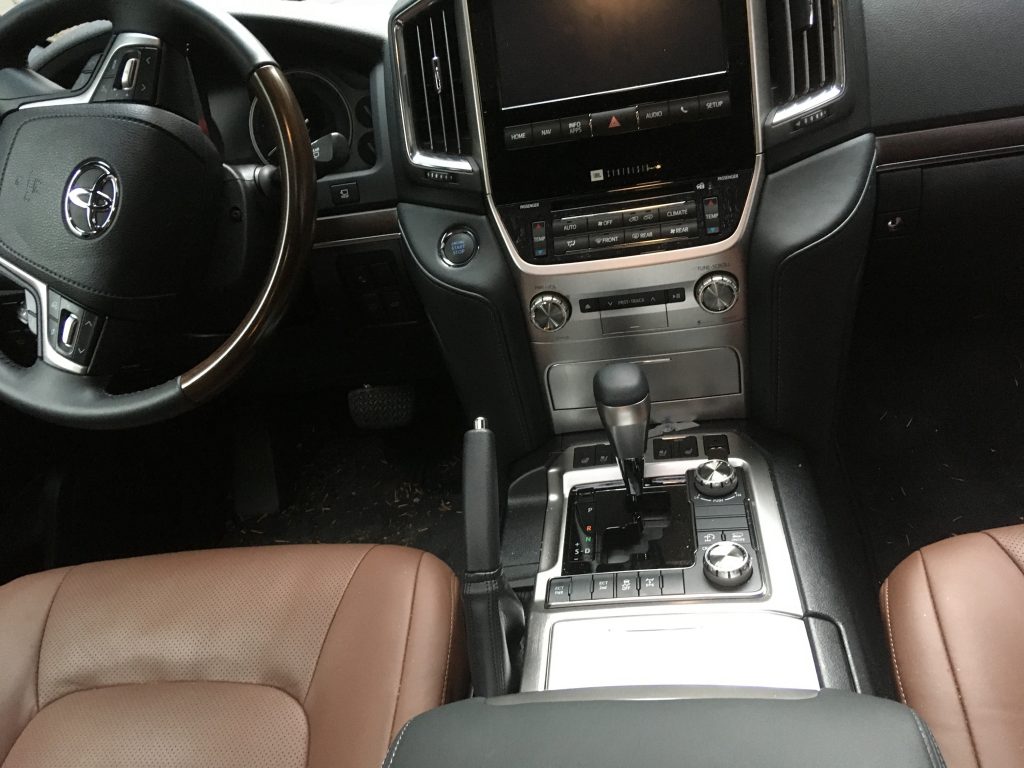 There’s nothing overtly family friendly about the 2020 Toyota Land Cruiser, and to be fair, it’s not touted to be. But it does come with the basics like kid car seat compatible anchor latch points and as mentioned before the 40/20/40 split second row worked nicely for us. We also, unfortunately, discovered the power window jam protection worked pretty well and probably saved me from accidentally snapping my 2-year-old’s fingers off when I was rolling his window up not realizing he was holding onto the top of the window as it went up. It still hurt him, but there wasn’t any bruising or long term injury and he recovered pretty quickly. Poor guy, but what a trooper. 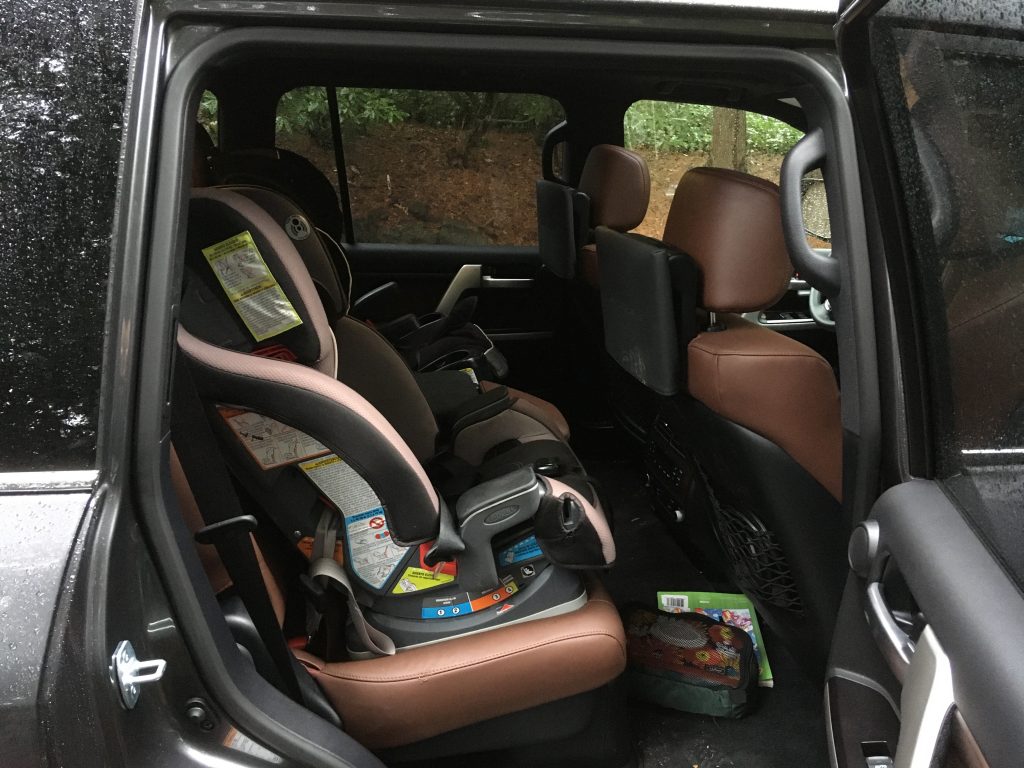 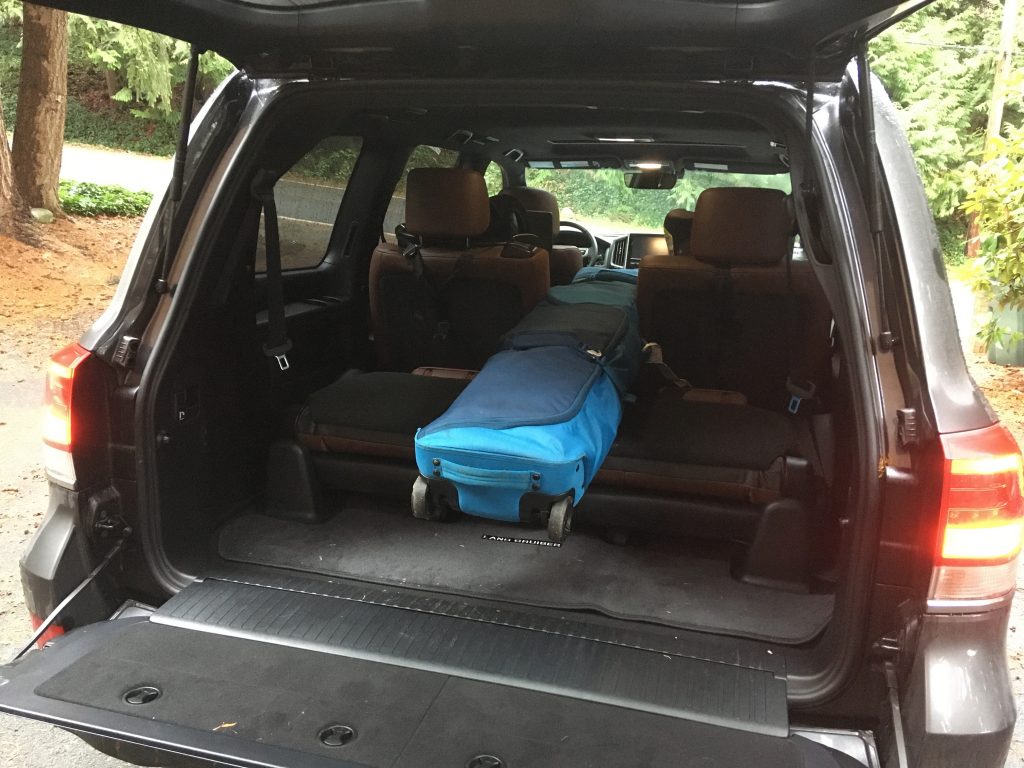 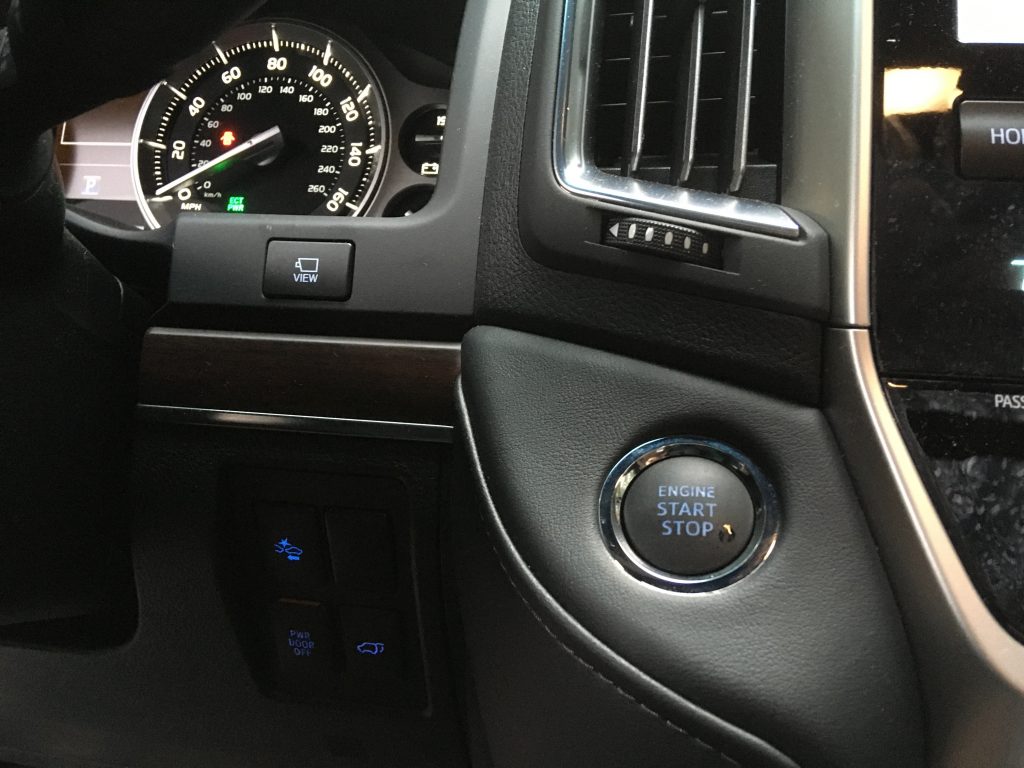 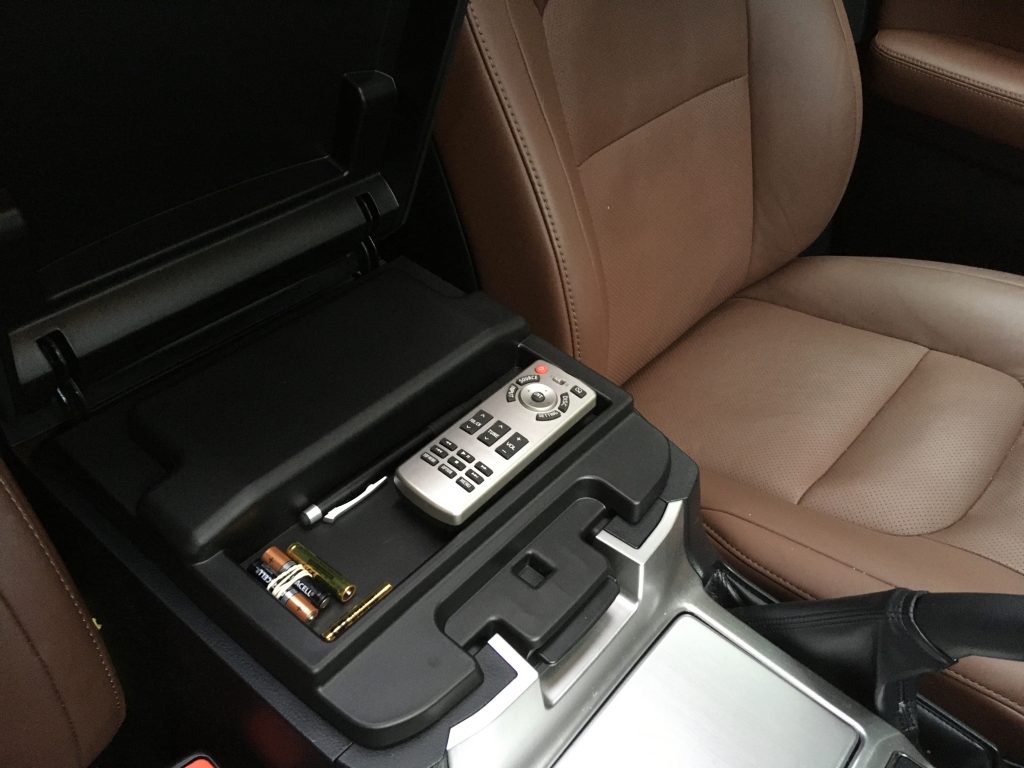