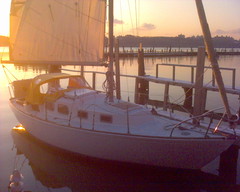 Shawn and I departed New York City at 6.30am under light wispy clouds in an otherwise clear sky to drive about fifty miles north up the Hudson River. It took all day to get the boat in the water. We originally wanted to catch the early morning ebb. But that didn’t work out. We had to make trips to West Marine to get parts and work on getting the boat ready. Then we targeted the mid day ebb… missed that, too. The boat yard wasn’t very efficient about getting us into the water. I’m not really sure what was going on there, but finally around 6pm the guy came by and told us he couldn’t put us in the water because he had to go to his kids wrestling match. Sean and I must have looked so dumbfounded or pathetic or both. We had to get the boat in the water and get down the river so I had a place to live and so Shawn could make it to work on time – 10am the next morning.

The yard owner drove off. Our jaws agape and we continued to work on the boat. A few moments later, the huge forklift – rather, boat lift crane came driving around the corner. I’m not sure what inspired him to put off his kids wrestling match, but he was ready to put us into the water! After slinging the boat up, carrying it over to the water and splashing it in it was 8pm. Now we were looking at the 10pm ebb. Rather, 10pm is high tide when the ebb starts. But we didn’t get launched until midnight. The engine gave us some trouble and it took a bit of sorting out. Once underway we were jubilant – regardless of the late hour. We motored for about an hour to the Tappan Zee Bridge and worked to set the sails. It was such a great feeling to cut the motor, the silence enveloped us until the sails snapped in the light breeze and we could hear the bow parting the water under wind power. We sailed all night, through the snow, wind and when the skies cleared, under the waxing gibbous moon that cast shadows of the mast, sails and ourselves dancing around in and out of the boat.

The wind was mostly at our backs, so we switched between going Dead Down Wind (DDW) to a broad reach as the wind and river twisted through the night. Sean went below to lay down for a bit while I took the helm. It was a wonderful night for a sail. It was cool, maybe 23F with the wind bringing it into the low teens. But we were properly dressed and really didn’t care much as we were sailing! A true joy.

Our late departure might have been our saving grace. That’s what Sean thinks, I’m not convinced. Just as dawn was breaking over Manhattan island, we were just approaching the George Washington Bridge. We noticed we weren’t making any more progress. The water was moving past us, but the shore wasn’t. The tide had turned and we were now fighting the flood. We had hoped the rising sun would bring some fresh winds, but all we had were soft puffs. Not enough to fight the flood. In the dark we missed the little marina on the Jersey side of the river. Once the light came up in the sky, Sean decided that would be a good place to pull in and wait out the flood tide, and maybe get himself to work from.

We couldn’t get the engine started – which was the crux of our late departure last night – so we had to drift with the tide and sail in light puffs of wind our way into the Englewood marina. There were no boats or people there at 7am. We pulled out a can of tuna and some crackers for breakfast and watched the sunrise. The golden beams cut through the cold air and felt great on our faces. Finally, some marina workers started to arrive and they said a cab could get Sean to work. I charged the battery of the boat, it had gone flat from illuminating the running lights on the sail down. We have a small solar panel charger on the boat, but that didn’t help in the dark.

It was a bummer Sean couldn’t be there for the final leg of the maiden voyage of his boat, “Elizabeth”. But I was honored that he trusted her to me to sail her the rest of the way down on my own when the ebb tide returned.

The wind down on my own was amazing and I had a blast. With one hand on the tiller and one holding the main sheet, they quickly went numb. But I didn’t care. I was on a broad reach and sailing right down the river. Absolute heaven.

When I arrived at the entrance to Lincoln Harbor the motor wouldn’t start again and I must have tacked over a dozen times to sail through the narrow, fluky wind/wind-less gap that is the entrance of Lincoln Harbor. At times the main sail would flop over just as I finished tacking and I would be forced to tack again. I was between a pier that had condos stacked on it and a large ship tied up at the mouth of the harbor. No more than three of my boat lengths across, it was quite the trip.

Once in the harbor, I didn’t know where my slip was, so I just took the first one I got to – a 50-foot slip. A bit bigger than I need, but I was just glad to get in the harbor and not washed down the river with the building ebb tide.