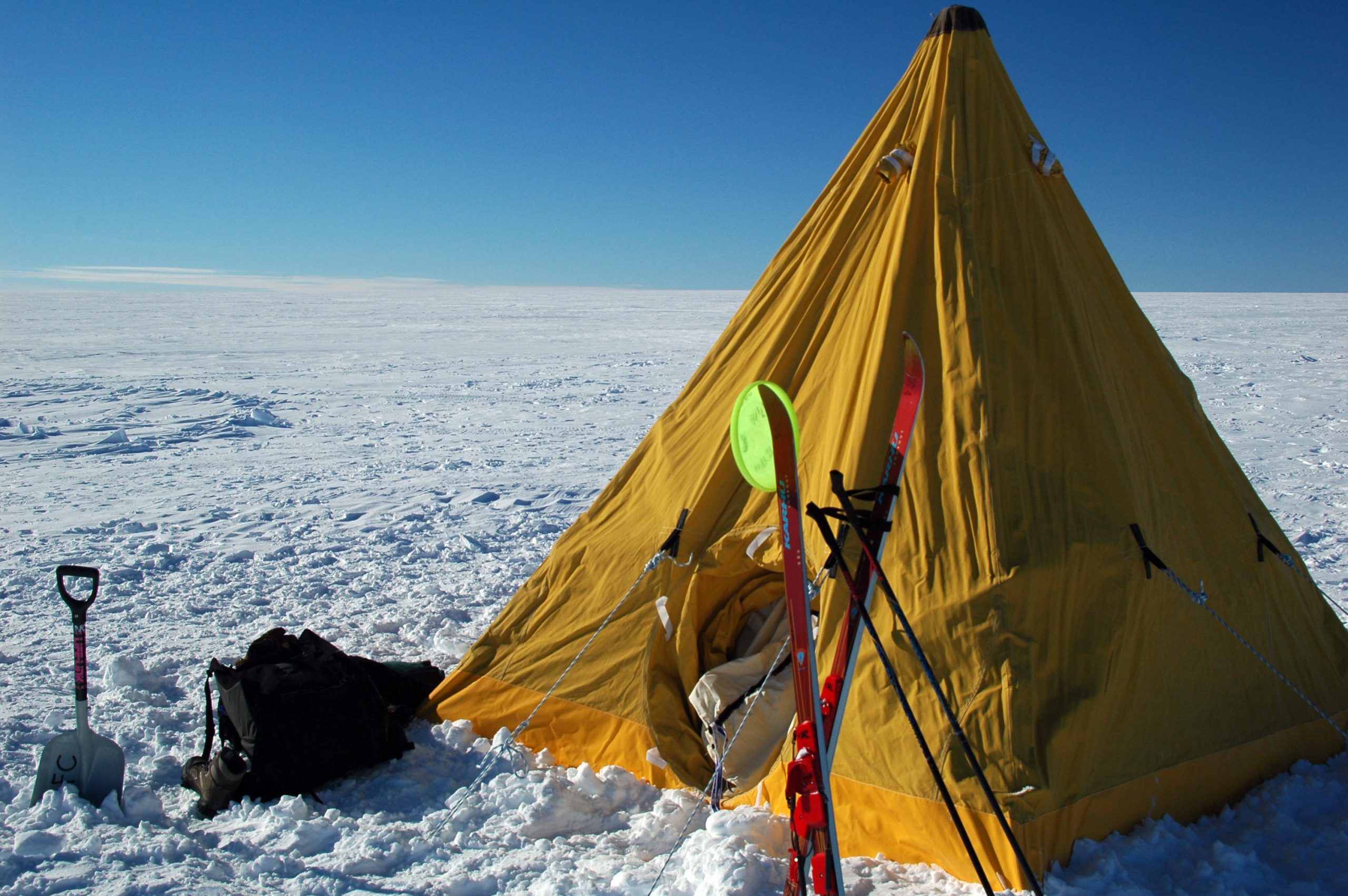 It was our weekend of Antarctic car camping. An instructor came up from McMurdo to take a group of us “Polies” out into the Great White Nothing to go camping for a night.

We started off with a classroom session on Friday night to get the basics on keeping warm, avoiding hypothermia and other ‘winter’ camping skills. Then, Saturday after work and dinner, we gathered and loaded up our ride out to the campsite in the middle of the Antarctic Plateau.

Actually, not everybody rode the “Piston Bully,” a personnel transport on tracks. Chris and I decided it would be fun to ski. Somehow skiing to camp heightened the adventure of the experience.

Chris and I loaded our gear onto the Piston Bully (this is car camping, remember) and started off on skis behind the rest of the group. At first we skiied in the tracks churned up by the transport vehicle, but after skiing on the raw sastrugi (wavelike formations of windblown snow) we found we got much better glide.

We moved along under a clear sky and intense sun toward camp – a slowly growing blip on the horizon. By the time we arrived the group had finished setting up much of camp but they saved us a Scott tent to help with. Named after British polar explorer Sir Robert F. Scott, the Scott tent is the only true polar tent. In fact, Scott used this style of tent on his last expedition in January 1911. On that fateful journey he died of starvation on his return journey after losing the race to be the first explorer to reach the South Pole.

His ill-fortune didn’t have anything to do with the tent, though. The Scott tent is double walled and resembles a teepee with a circular sleeved entrance and a summit line that anchors into the snow. It’s designed to be erected in the foulest of weather although with bluebird skies and gentle breezes we didn’t have to test that feature.

Our next lesson in Antarctic survival was building a snow wall that would act as a windbreak to help protect camp in the event the winds picked up. We reviewed simple laws of physics like putting larger blocks on the bottom, smaller ones on top, and making sure the closest tent to the wall was no closer than the wall is tall on the leeward side. The latter is important for preventing the tent from getting buried by swirling snow carried back by the eddies off the wall.

After building the wall we had some free time and a few of us threw around the Frisbee I brought along. This wasn’t just your casual Frisbee toss. There was enough wind to put the Frisbee just far enough from the intended target to get them to run or even dive for it. As it turned out, it was pretty fun to dive and land in the soft snow although we had to watch out for the few solid patches.

But the Frisbee game was the final straw for me. I was exhausted. I crawled into the Scott tent and started the tedious process of getting out of my layers and layers of warm clothing. When I was finally down to my long johns and a wool jacket to keep my top warm as I crawled into my bag, I laid back just for a moment to rest from the wearisome undressing, fully intending to take that wool jacket off – eventually. That never happened.

I awoke the next morning to a single cold drip of water. It was condensation from my breath that had gathered on the rim of my sleeping bag, falling on my upper lip. I heard muted voices and movement around camp but I had no idea what time it was. The fact that the sun is always up was no help. I gingerly wrestled my way out of my sleeping bag. The comfy sleepy warmth drifted up and massaged my face just as the cool polar air rushed in to speed my awaking. I looked down and saw the frozen remnants of my breath gathered around the opening of my bag. I still had my blue wool jacket on and realized how tired I really was the night before.

The dressing process is just as tedious as undressing. In one case your muscles are weary from the previous day’s activities and in the other you’re trying to overcome the night’s immobility.

When I finally emerged from the round sleeve passage of the tent, I was greeted by something very unusual for interior Antarctica. The sky was grey and a small disk of light – the sun just barely showing through the clouds – was right in front of me. The wind had increased slightly and it was snowing. Regardless of the fact that we sit on three kilometers of snow and ice here, it rarely snows. While these flakes weren’t the big fluffy ones that land on your nose and increase your cuteness quotient, they were big by Antarctic standards. It was a nice reminder of the conditions us northern hemispher-ers are used to around the holiday season – especially as we approach the start of the austral summer.

After a Cadbury Crunch chocolate bar for breakfast, we delved into the process of striking camp. We stuffed and stowed sleeping bags, rolled up insulation sleeping pads, dug up the dead man snow anchors we had buried the night before, dropped tents. When the Piston Bully arrived, we packed on the gear and rolled back to the station like the family wagons pouring out of America’s National Parks after Labor Day Weekend.

Once back, we hung everything to dry and air out. After a very satisfying brunch, we packed all that dry gear into the large storage boxes from whence it came. And there it will sit until the next group of ambitious Polies get up the nerve to camp out on the great expanse that is the interior Antarctic Plateau.