Thirteen miles makes for a pretty good day hike for a group of 13-14 year olds. Add on a full pack laden with sleeping bags, tents, stoves, pots, food and other gear, five peaks over 4,000 feet, a 3,000 foot descent, a 5.30 am get-up, and a lightning and thunder storm the night before, and suddenly 13 miles makes for a very long day.

The peaks we covered were those of the Carter Range along the Appalachian Trail in the White Mountains of New Hampshire. We started at the end of a five-mile dirt road at the Wild River Campground and headed up the Morriah Brook Trail to Imp Shelter. The first day we did a mere six miles and gained approximately 2,500 feet.

The trail was beautiful. The sky was lightly overcast, so it was plenty light, but we were spared the brutal heat of direct sunlight as we hiked along Wild River and made our ascent through the beech forest towards the spruce and fur dominated ridge.

Imp Shelter is one of the more established sites in the AMC and has a generous shelter along with a few tent platforms and a group platform. All of which were full. Fortunately, the popularity of Imp has caused there to be an overflow area, and the caretaker, John, was happy to let us set up camp there.

The overflow site is right next to the Imp Bench, which normally looks over Mount Washington valley towards the east and is renowned for stunning sunsets. Normally, but not today, because that light overcast sky slowly turned against us and was now thick, grey, and allowing rain to fall. The rain was light enough to tolerate standing out for dinner, but afterwards the drops became larger and more frequent. Some of the group retired to their tents. There were a few adventurous souls, for whom the days’ hike was not sufficient and they went for a little walk to explore the area.

My alarm buzzed at 5 am and the clouds had thinned out again after an amazing display of thunder and lightning boomed across the ridge and lit up the tents. Rain blew horizontally and the wind attempted to lift the rain fly right off the tent. Later in the morning a few orange sunbeams broke through the cloud cover and the sparse canopy of conifers on the ridge during breakfast. Those quickly faded and we were back to our light layer of overcast as we hit the trail at 7.30 am.

We continued along the ridge heading south on the Appalachian Trail. Most of the walk was in the trees, but at times the granite rock would lift up and be too exposed for a soil base to develop and for trees to grow. At times, the valleys would spread out in their grandeur of flowing trees and other times the same valleys would be shy and hide behind the clouds and mist swirling around in an exotic dance of white and gray.

As the ridge undulated beneath us, we picked off the peaks with out any trouble at all. North Carter Mtn. (4,530′), Mount Lethe (4,584′), Middle Carter Mtn. (4,610′), South Carter Mtn. (4,430′), and finally we dipped down into Zeta Pass (3,800′), where we stopped in a beautiful lush setting of dark brown trails contrasted with the subtle glow of green grass and moss lining the path and decorating the ground surrounding us. This lunch stop proved crucial as we proceeded to tackle a brutal 600-foot climb to the exposed 360-degree view summit of Mount Height (4,675′). As we were climbing the clouds started to break up, and occasional bursts of sunlight turned to steady beams in proportion with the gusts of wind lapping along the trail then turning to a constant presence as we crested the humbly rounded rocky summit.

We were ahead of schedule and as some of our gear was still wet from the night before, we opted to take some time in the sun and wind to let those elements whisk away the water from our laden sleeping bags, tents and clothes.

From Mount Height, we dipped down across a small saddle and climbed our highest summit of the trip, Carter Dome (4,832′). The peak was mostly wooded with a few bare spots and sparse views. We were glad we spent most of our rest time at Mount Height.

To get down from Carter Dome, we followed Rainbow Trail, which looks like it is rarely used even though it is absolutely gorgeous (maybe that goes hand in hand). Each eco-tone put on a stunning display of its lush plants and the lay of the land only adds to the harmony and compliments each unique elevation. The colors were fabulous. The dark brown trail was often flanked by green moss and grass, contrasted by the brown trunks of conifers, which dominated above 3,000 feet. Highlights of the woods were the rich dark green of the needles, capped with lighter green tips of this year’s growth. As we got lower, the large and abundant lush leaves of vine maple and beech trees covered the scene in a sea of green, intermittently broken up by the stark white trunks of birch trees.

Though we were pushing over mile ten, our descent never seemed tedious. Our original plan was to stay the night at Perkins Notch Shelter. There was no water to speak of and the shelter itself was modest at best. There were no tent platforms or areas to put the tents without sinking in the marsh. By the time we got there we still had plenty of daylight and opted to push on another two miles to Spruce Brook Campsite. The trail was pretty wet. We were in the upper valley of the Wild River, which was mostly swamp. There were a few bog bridges and stepping-stones to get through the muck. Oftentimes, however, there were none. These swampy, soggy sections of trail helped us appreciate the sections of dry trail between the wet slogs.

Pushing on to Spruce Brook Campsite proved to be an excellent move. The shelter was already filled with another group, but there were some nice tent platforms for us to call home. There was also the Wild River where I indulged in a much needed bath to rinse away the sweat and grime from the past two days and the mud caked up on my legs from today’s swamp crossings.

Our simple dinner of curry cous-cous with cashews and crazins went well and sleep came easy that night. We woke to the dim light of a cloudy and rainy morning. The heavy drops plopped down onto our tent and I lay there, just listening. An easy breakfast was put together under a tarp and we made the final push out towards the van.

The trail went right along with the Wild River. The rain abated, but the clouds continued to linger around as we hiked into the parking lot of the Wild River Campground, where we loaded our packs, stripped off our wet clothes and headed home, soaking in the memories of the great trip we just had. 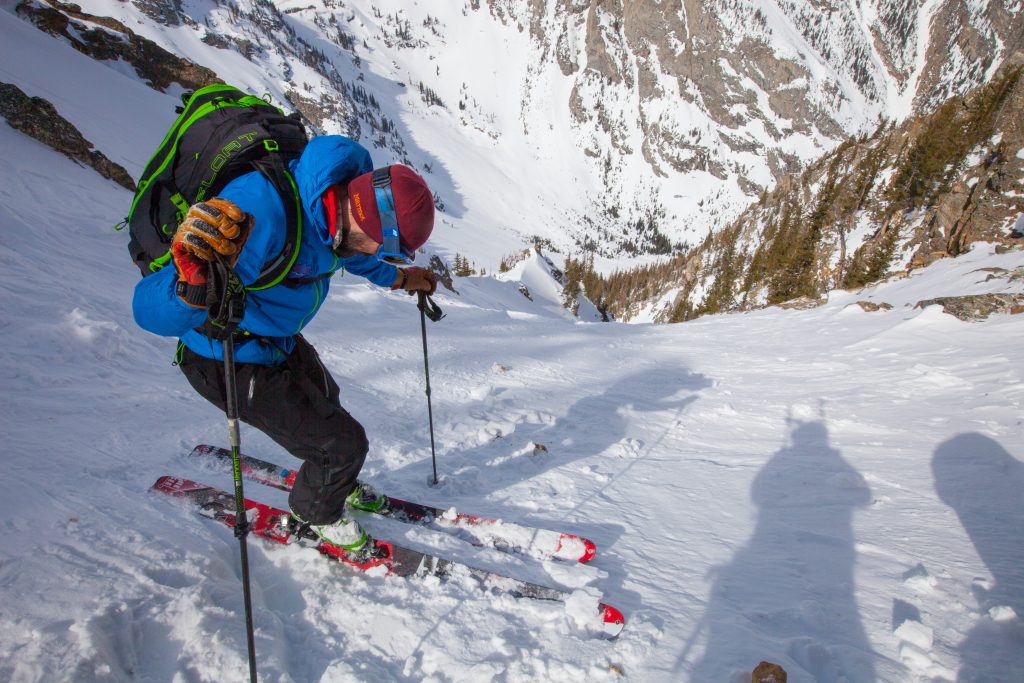